ciao tutti…..happy 1st June to us all. 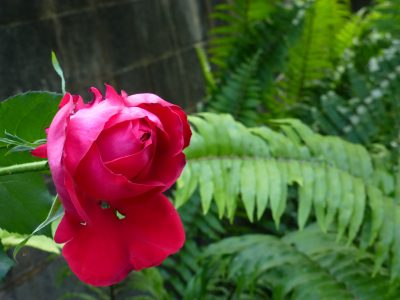 June in the Julian – Gregorian Calendar is named after  Juno, Roman goddess, wife of chief god Jupiter and goddess of marriage .

It is only the second month named after or in honour of a woman.  Hmm…. we can blame that on those toga wearing Roman emperors.

Happy Month to those amongst us named June, celebrating a birthday or a wedding anniversary! 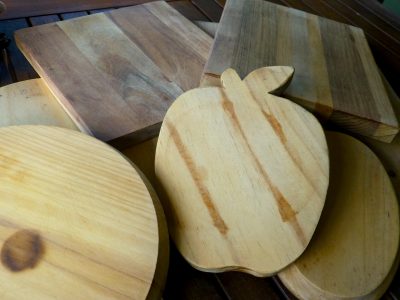 ciao tutti….le weekend! Has a certain ring to it in any language, does it not! What are your plans?
The Little Cellar Rat got to it yesterday with the little Makita finishing sander and gave the wooden chopping boards a good once over. She’s collected 8 or 9 over the years and yes, they all get used – ‘horses for courses’. They’re a pleasure to use, easy to clean and sanitise and they don’t blunt your knives. Teach other members of the tribe to use one for onions and garlic and a separate one for fruit and nuts. Write these instructions on each one with permanent pen – no excuses then…. She’s off to do that now! buona cucina, buon appetito!

ciao tutti! Friday ….. and another milestone on the road to recovery 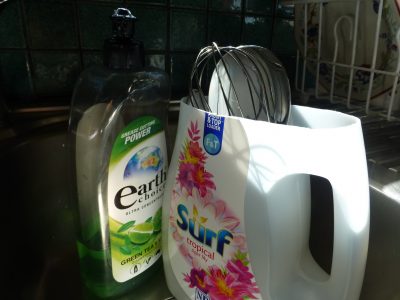 ciao tutti! Friday ….. and another milestone on the road to recovery.
End of the school week, the kiddlies are coming home starving and of course they’re continuing the Friday Afternoon Pancake tradition established or re-established during Schooling From Home. Most folk, both big and small, like the cooking side,(because you get to EAT SOMETHING) but no so much the washing up side. The Little Cellar Rat’s mother gave her a great tip aeons ago and that was to have a small container of hot soapy water in the sink to wash spoons etc as you use them, that way one tablespoon can be used and re-used and keep the pile of washing up under control. buona cucina… buon appetito! 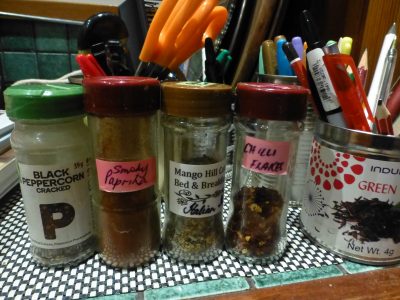 ciao tutti! With many opportunities during the prolonged CV Lockdown for everyone to experiment in the kitchen, no doubt the kids will have some interesting and tasty lunches (homemade, self- made) packed into the school bags this week. The Little Cellar Rat finds having much used herbs & spices stored together simplifies and speeds up things.
Her 4 Amigos – Italian herbs, smoky paprika, chilli flakes and cracked paper.
buona cucina… buon appetito! 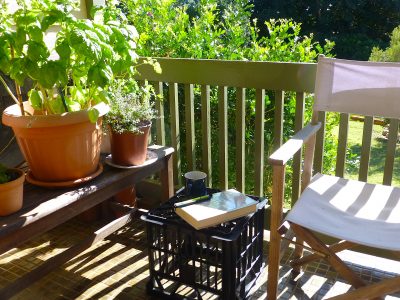 ciao tutti! The Little Cellar Rat likes basic objects that are multi-functional. Take the humble milk crate: light weight, sturdy, economical. Just for starters…. Good as a mini-table for your coffee and a read + write in the sun, helpful in the garden (now… where did those secateurs go?) as temporary storage, a handy seat if you’re tidying out a low cupboard. (DO NOT however be tempted to use as a stool, right!)
Stay safe, stay sane and remember we are all still journeying together.
CELLAR DOOR OPEN FOR TAKE-AWAYS. 4126 1311
0408 875 305

ciao tutti…. we’ve made it to another Friday! 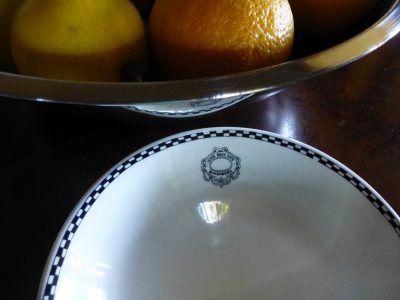 ciao tutti …. Friday and the overcast sky invites us to find a little spot in the sun. What’s on the menu for lunch? Whatever it is, choose a piece of crockery that brings a smile, summons up memories, makes you laugh out loud or shed a tear… possibly both. buon appetito….. alla prossima!
YES – Cellar Door OPEN today for take-aways. Loving the phone orders so far!! 0408 875 305 4126 1311 mangohillcottagebb@bigpond.com 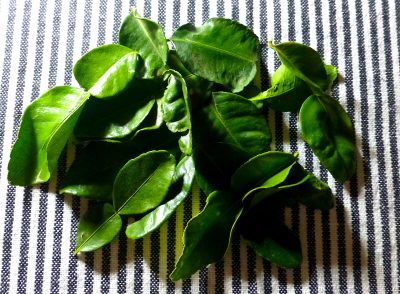 ciao tutti… It’s Wednesday and those chilly fingers of a southerly are tapping on the windows here on The Hill.

Did someone say CURRY ??? If you haven’t made an acquaintance with these little beauties then now’s the time. KAFFIR LIME LEAVES work magic on just a simple Tinned Pink Salmon Curry. The little Cellar Rat likes to leave them whole, but you can finely shred them.

If you don’t have a ‘Go To Curried Salmon’ recipe, check out ours in the next post . It’s simple enough for the kids to make.

ciao tutti…. Tuesday and a bit of chill around the workplace? 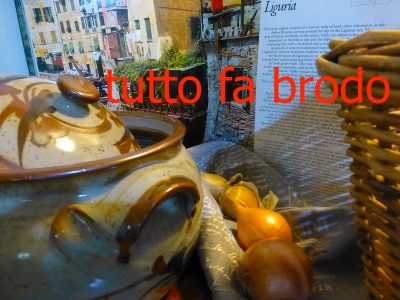 ciao tutti! A bit of a chill around the workplace this morning? Hmmm…. soup comes to mind which brings the Little Cellar Rat to this morning’s post, a food related Italian idiom.

In English – ‘ every little bit helps’
In Italian – ‘tutto  fa brodo’ (lit: everything makes soup!)
Stay safe, stay sane and remember we are getting through this together. buona cucina… alla prossima!

ciao tutti…..Sunday …. zzzzzz …. and time for something slow-cooked. 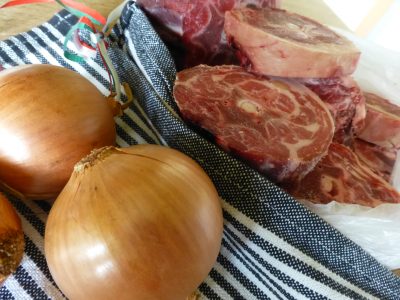 ciao tutti…. Sunday and is that z-z-z-z-z-z I can hear! You most likely have something in the slow cooker bubbling away and filling the house with aromas that are nourishing and sing of flavour. In the Cellar Rat’s kitchen it’s slow cooked neck lamb chops with the usual suspects of red wine, tomatoes and fresh herbs. If you shy away from lamb because you find it too fatty, here are a few tips from experience and la cucina di Maria:
-cut off as much fat as you can BEFORE you brown lamb (the exception is a leg or shoulder to be roasted)
-spoon off any fat that remains at the end but you can also use several layers of paper towelling (one at a time) or throw in some ice cubes and watch the fat solidify. Sure, you can chill and remove later but if you want to enjoy immediately, these work for TLCR.
buona cucina! bun appetito! 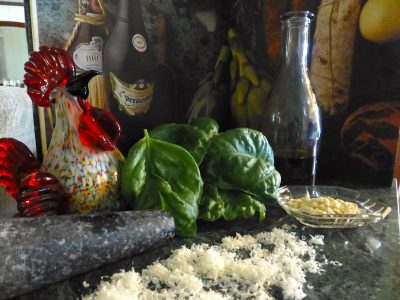 Ciao tutti!  Friday and the end of the working week and it’s back to food.

Every cusine has its ‘go-to’ product, used as a staple for whipping up a meal in minutes and permeating so many recipes.  For Italians it has to be BASIL PESTO. The Little Cellar Rat has a pot of beautiful big-leafed basil in a pot outside the kitchen.  She made a batch last weekend as Mr B is already coming into flower. Next time it will be 50/50BASIL AND BABY SPINACH. Fragrant, creamy and rich, it originated in GENOA the Ligurian capital. FYI  ‘pesto’ comes from the Italian verb ‘pestare’ to pound, you know it already in ‘mortar and pestle’  buona cucina…. Buon appetito! 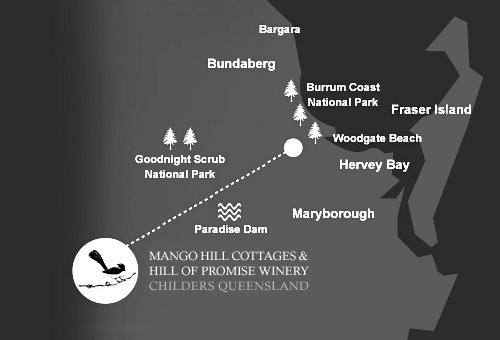